Getting Out of Our Own Way 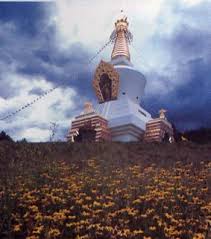 Or Practicing Peace In Times of War ala Pema Chodron

It was an August evening in 2008. I was deep in the Colorado Rockies at Shambhala Mountain Center and, except for a skeleton staff, I was alone.

I had purposely arrived two days before the retreat seeking rest, alignment, and stillness. But to be truthful I was seeking refuge from my mind. A troubling experience three weeks before was keeping my MonkeyMind rigid and swirling.

Bottomline: There was a war inside of myself and I was unable to get out of my own way.

After dinner I walked an unknown path that went up into the forest. It was well worn and yet carefully groomed. I could hear the wind blowing fiercely from one mountaintop to the next as it made its way toward me.

When the summer wind found me it whipped through my hair and left my body chilled to the bone. I felt raw, exposed and with an uncomfortable Beginner’s Mind. I kept walking.

A wooden bridge appeared and seemed to welcome me with colorful Tibetan prayer flags but I couldn’t let them in. I kept walking.

The forest opened into a large field of wild flowers. In the center was a beautiful white Stupa touching the stormy gray skies of the Rockies.  I knew it was an auspicious moment and yet I couldn’t let it in. I kept walking.

Looking downward I walked up the steep steps to the Stupa and began circa-ambulating doing kinhin, a very s-l-o-w walking meditation. The quietness held me and I began weeping.

I was exhausted from this war inside me. I was flummoxed as to what to do. It seemed as though none of my Buddhist practices or trainings were helpful. I felt alone as the wind whipped through me once again. I kept walking.

With my eyes downward I watched the tears hit the ground. Then I heard gravel crunching slowly and steadily behind me.  A strong arm looped through mine and we quietly kinhin-ed together with our eyes downward.

No words were spoken. No direct eye contact experienced. Yet being witnessed in my suffering diffused the suffering. My mind began to settle. My heart began to melt. My eyes began to see color again. We kept walking.

We walked together. The tears flowed more, but now it was tears of gratitude for this precious life with so many teachings. I felt a squeeze on my arm, looked up into the gentle eyes of Pema Chodron.

Two days later as Pema began the teachings from her book, Practicing Peace In Times of War, she shared this Cherokee (Those Who Live In the Mountains) story.

Which Wolf to Feed?

“There is a war inside of you, my grandson.  It is a war between two wolves. One wolf is greedy, ignorant, vengeful, cruel and oblivious to the hearts of others. The other wolf is compassionate, understanding, kind, resourceful and generous.”

The grandson closes his eyes and thinks about these two wolves inside of him.

After many minutes he opens his eyes and asks his grandfather, “But which one will win the war?”

And the grandfather without hesitation says, “It will be the one you feed.”

So, how do we get out of our own way and feed the right wolf?

• Sit on your cushion and watch your thoughts. Even if for five minutes.
• Bear witness.
• Listen deeply.
• Once your mind has settled ask, “What is my next step?”

• Meditate as above.
• Change your physical location to encourage a reset.
• Walk the Unknown Path.
• Keep walking even when it is edgy.
• Trust what arises.
• Speak the truth to yourself.
• Be open to surprises.
• Let your heart soften.
• Steep yourself in gratitude.
• Connect in the silence.
• Keep walking…

Commitment
What happens when we get out of our own way and we become committed?

Below is an action plan in the form of a credo. We study this in our classes because it is more than motivation, more than courage, it’s surrendering to the Unknown Path.

Until One is Committed…

…there is hesitancy, the chance to draw back,
always ineffectiveness.
Concerning all acts of initiative (and creation),
there is one elementary truth,
the ignorance of which kills countless ideas and splendid plans:
that the moment one definitely commits oneself,
then Providence moves, too.
All sorts of things occur to help one that would never otherwise have occurred.
A whole stream of events issues from the decision, raising in one’s favour all manner of unforeseen incidents and meetings and material assistance,
which no man could have dreamt would have come his way.
I have learned a deep respect for one of Goethe’s couplets:
“Whatever you can do, or dream you can, begin it.  Boldness has genius, power, and magic in it.” 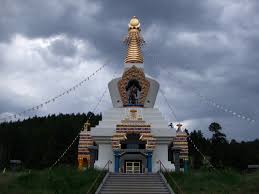 Business Alchemy came at the perfect time in my identity formation as a coach. The instructors brought home practical aspects of crafting a business and marketing tools in a way that was more about solid self-expression rather than by-the-book, one-size-fits-all. The creativity flowed.

As a certified EMDR therapist working as a psychotherapist for the past 12 years, my focus has been helping others deal with the aftermath of trauma. That has taken a toll on my soul. This was my first class with a focus on positive psychology. I am left with a stirring feeling of hope that I can truly help others to thrive, not just survive. Thank you! [The Dynamic Trio: EMDR, Positive Psychology, and Somatic Coaching]

I’m on a new path and wanted to thank you! I accepted your challenge of saying the loving kindness meditation 3 times per day on the ‘live on the air’ coaching January 21, 2016. It has helped reframe my perspective and pull up more of my hope and optimism.

Taking this class [Skillful Means: The Coaching Skill Set] was essential to building my toolbox as a coach. I feel that my range of skills have broadened and that my clients can be served much better.

Skillful Means is a great class that teaches the basics on how a to conduct a coaching session. You dive right into learning and practicing coaching. This helped me get out of my own way and start doing what I was learning. I often find myself learning new skills and then never putting them into action, but in this class I got the best of both worlds, learning and doing!

I now have the skills and confidence to begin bringing on some clients. I am grateful to all those who work so hard to help educate others. [Skillful Means]

Where Mind Goes, Qi Goes: Somatic Coaching with Qigong introduces us to a simple yet essential practice for, in a sense, returning us to our bodies where we can really begin to sense the energy that we have. This is nourishing for us as coaches who often absorb and hold the energy of our clients, while allowing us to incorporate energy generating, diffusing, directing, and managing practices with those same clients. This class reminds us of the need to stay connected to our bodily wisdom–energetic as well as physical–and not get lost in our head.

Body Electric is great for those that are looking to challenge the automatic responses and default ways of thinking and being. Realizing that the conversation with the body has a different vibration and that it doesn’t always speak quickly is so valuable. Our bodies are a wealth of comfort and wisdom. This class provides tools for starting that dialogue with yourself and with others.

Ann-Marie was so open and honest. She was extremely patient and I look forward to more classes with her. She embodies the true spirit of a coach as she pushes you towards your own personal goals, while managing to teach you to focus on the client’s goal as well. Kudos to her and her team!

Meg is a great coach and teacher. She has very kind presence and incorporates variety of exercises and approaches to coaching which makes learning fun and interesting. The NVC proves to be the language of life and I love to see all of us really live this language with people around us.